Glaciers or Rising Oceans; Damned if you do, damned if don’t, And maybe both

We are currently in an inter-glacial period that started about 11,500 years ago. Our current inter-glacial period is part of the Pleistocene that started 2.5 million years ago. This time period was marked by advancing and retreating of ice glaciers that were close 1,500 and 3,000 meters thick.  At the full extent the glaciers average temperature along the edge of the ice was 21 degrees Fahrenheit and the ice covered close to 30% of all the land mass in the world as compared to 10% right now. These climatic changes often led to a 300ft drop in the sea level compared to current sea level.
However, it has been observed that about every 40,000-100,000 years ago the glaciers would retreat. Modern science has discovered that orbital variation known as the Milankovitch cycle have been causing these milder events known as interstadials. Climate change driven by Orbital variation may not be limited to the Ice Age. It has been observed that orbital variation may have been a very important driver for climate change for 1.4 billion years .

"We report geochemical and sedimentological evidence for repeated, short-term climate fluctuations from the exceptionally well-preserved ∼1.4-billion-year-old Xiamaling Formation of the North China Craton. We observe two patterns of climate fluctuations: On long time scales, over what amounts to tens of millions of years, sediments of the Xiamaling Formation record changes in geochemistry consistent with long-term changes in the location of the Xiamaling relative to the position of the Intertropical Convergence Zone."
​
A recent example of an interstadial that has been been well documented is an inter-glacial event that happend roughly 115,000 to 130,000 years ago known as the Eemian. During the Eemian the global temperature was several degrees Celsius higher than it is today and the oceans were somewhere 20-30 feet deeper. This of course is not even considered an anomaly, it is estimated that all the inter-glacial periods might have had similar climate conditions as the Eemian. There is even evidence that Greenland may have been  ice free for 280,000 years about 1.1 million years ago. What is even more remarkable is that many ice age mega fauna that went extinct 11,000 years ago survived the previous  interstadials even though the oceans were higher and the temperatures were warmer; forests reached North Cape, Norway.
Moving into the realm of humankind’s recorded history, many scientists in the world believe that carbon dioxide is currently the main contributor to a recently modest increase in temperature. The word modest is used loosely in the sense that there are many who believe that large climatic changes are happening as seen through the eyes of modern human beings and through recorded history. If you discount warming periods observed by Romans and Vikings. 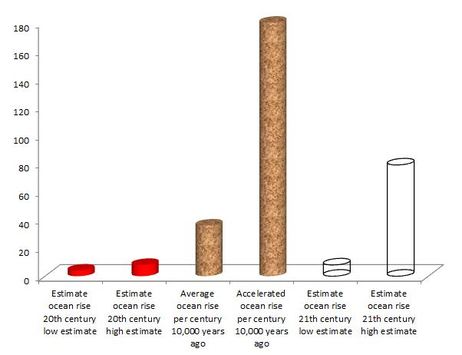 Current climate conditions compared to climate changes over hundreds of millions of years, nothing probably seems out of the ordinary. And current shrinking glaciers do not even compare to the disappearance of ice that covered a large extent of North America and Eurasia. Matter of fact, current climatic trends might be so shocking to people because we have no personal experience to relate to the massive changes on earth that occurred only 10,000 years ago. It is believed that Tagalog sea level rose by a total of more than 120 meters as the vast ice sheets receded. This melt-back lasted from about 19,000 to about 6,000 years ago, meaning that the average rate of sea-level rise was roughly 1 (39.4 inches) meter per century. It also believe that during some periods the ocean may have risen close to 5 (196.85 inches) meters a century. This rate was an order of magnitude larger then the estimated 4-8 inch rise observed during the twentieth century. To give you an idea of how much faster the oceans were rising 10,000 years ago compared to the twentieth century; 450% to 900% meter/century rate faster using the average estimated rate and 2,250% to 4,500% meter/century using the accelerated rate. However, there is no doubt that carbon dioxide concentrations are increasing across the board. And many studies show that ocean temperatures are increasing faster then the surface temperature and temperature magnification at the poles. However, lets compare this to data from the past and present.

We do see a small modest increase in the average global temperature. However, as a rough estimate, the last glacial advance was 9-12 degrees Fahrenheit cooler than the temperatures of the 20th Century. That means that the temperature increased 20-28% before human beings started to record and measure temperatures. It also has to be taken into account most of that temperature change happened in a very short period of time over 11,000 years ago. This compared to a 2-3% temperature increase in the last century . This does not even take into account that over half of the current temperature increase might be natural, back ground noise, or hyper sensitivity from technological advances in temperature detection.Plus, during the Emmian period Earth saw temperatures higher then our current global averages. And it has been observed that temperatures in the Antarctica were higher in the last two inter-glacial periods then the current temperatures. What they are also finding is that the global temperatures spiked and went up towards the end of several inter-glacial periods. This suggest that an increase in temperature might be  normal, including an additional sea level rise of another 20-30 feet. This might be a common occurrence that drives the earth into a glacial period. A research paper from 2009 showed Antarctica in a previous inter glacial may have been 6 degrees Celsius higher then today. In a recent lecture by Ayako Abe-Ouchi, Atmosphere and Ocean Research Institute at The University of Tokyo, lectures on Modeling the 100,000-year Glacial-interglacial Cycles, says, "carbon dioxide is a very important amplifier, but not a driver."

​And some accuracy in predicting climate change can be lost in background noise and variation caused by forest, aerosols, sun spots, and natural occurrence. A recent statement about deforestation reads as the following.

"When the impacts on biogenic SOA, O3 and CH4 are combined, global deforestation exerts an overall positive RF of between +81.1 and +135.9 mW m−2 through changes to short-lived climate forcers (SLCF). Taking these additional biogeochemical impacts into account increases the net positive RF of complete global deforestation, due to changes in CO2 and surface albedo, by 7-11%. Overall, our work suggests that deforestation has a stronger warming impact on climate than previously thought."

Other variations in climate could be Chaotic Solar system, sun spots, climate inertia, and ultra-hypersensitive collection of new data by new technological means that did not exist 50 years ago. Recently CLOUD said that aerosols may be underestimated in modeling attempts for climate change and suggest that the scientific community reduces it's "climate sensitivity." There statement below reads as the following.

"Early this year, CLOUD reported in Nature the discovery that aerosol particles can form in the atmosphere purely from organic vapours produced naturally by the biosphere (CERN Courier July/August 2016 p11). In a separate modelling paper published recently in PNAS, CLOUD shows that such pure biogenic nucleation was the dominant source of particles in the pristine pre-industrial atmosphere. By raising the baseline aerosol state, this process significantly reduces the estimated aerosol radiative forcing from anthropogenic activities and, in turn, reduces modelled climate sensitivities.
​
“This is a huge step for atmospheric science,” says lead-author Ken Carslaw of the University of Leeds, UK. “It’s vital that we build climate models on experimental measurements and sound understanding, otherwise we cannot rely on them to predict the future. Eventually, when these processes get implemented in climate models, we will have much more confidence in aerosol effects on climate. Already, results from CLOUD suggest that estimates of high climate sensitivity may have to be revised downwards.”

Recently, a scientist named Dr. John Bates has been the topic of many viral stories, alleging that he is a whistle blower of sorts exposing falsified data on climate change. Though much of these stories were not entirely true,. what his recent blog illustrates is that climate change might be science, but it is not black and white and many people argue and differ in opinion on everything. People forget how messy science can be, and sometimes the right answer is the least wrong until a better theory replaces it. You can read his blog here (Climate scientists versus climate data)
"The most serious example of a climate scientist not archiving or documenting a critical climate dataset was the study of Tom Karl et al. 2015 (hereafter referred to as the Karl study or K15), purporting to show no ‘hiatus’ in global warming in the 2000s (Federal scientists say there never was any global warming “pause”). The study drew criticism from other climate scientists, who disagreed with K15’s conclusion about the ‘hiatus.’ (Making sense of the early-2000s warming slowdown). The paper also drew the attention of the Chairman of the House Science Committee, Representative Lamar Smith, who questioned the timing of the report, which was issued just prior to the Obama Administration’s Clean Power Plan submission to the Paris Climate Conference in 2015.

In the following sections, I provide the details of how Mr. Karl failed to disclose critical information to NOAA, Science Magazine, and Chairman Smith regarding the datasets used in K15. I have extensive documentation that provides independent verification of the story below. I also provide my suggestions for how we might keep such a flagrant manipulation of scientific integrity guidelines and scientific publication standards from happening in the future. Finally, I provide some links to examples of what well documented CDRs look like that readers might contrast and compare with what Mr. Karl has provided."


One thing is for sure; our future civilization will face global sea rises or another glaciation period. And it is possible they may face both. But if current climate conditions were compared to the past, earth is relatively stable, all considering snowball, asteroids, volcanic activity, continental shifts, carbon dioxide concentrations, and more. Also, current temperatures are relatively low compared to temperatures that occurred over Earth the last 500 million years. So, maybe rising temperatures is more normal then we think? Most people reading this are more likely to see major global calamities caused by war, famine, pestilence, economic upheaval, humanitarian crisis; which is usually caused by over population, micro cyclic weather patterns, economic stagnation, and various forms of human conflict. But you never know, a small foot rise in the ocean might be the thing that pushes our modern civilization over the precipice. But all this means is that there is a lot more to learn about our Climate.