Micro Interglacial Cycles and an Alternative Understanding to Sea Level Fluctuations from a Paleoclimatic Perspective the Last 140,000 Years
August 22, 2019

“In fact, the rise and fall of sea level is not a new issue for mankind although it has become one of the most heated topics recently.  For example, during the last ice age, sea level fell to more than 120 m below present day sea level as  water  was  stored  in  ice  sheets  in  North  America (Laurentian,  Cordilleran),  Greenland,  Northern  Europe (Fennoscandia  and  the  Barents  region)  and  Antarctica.  When the ice melted, starting around 20 000 years ago, sea  level rose rapidly at average rates of about 10 mm yr-1 (or 1 m per  century), and with peak rates  of the order  of 40 mm yr-1 (or 4 m per  century), until about 6000 years ago  (Church  et al.,  2001).”

Also please read our Articles
NOAA shows a modest 3.2 mm sea level rise over the last year. How significant is the current sea level raise from a geological perspective?
Increasing Summer Insolation of the Northern Hemisphere Trends Towards Reduced Ice Volume; Coupled by a 400,000 year Eccentricity Cycle Extending the Holocene Interglacial
Micro Interglacial Cycles
​When scientists and policy makers debate the significance of the current sea level change they often use  statistical data postulated on an idea that the current interglacial is in stasis state that represents an unmoving equilibrium. However, MOTM would like to point out there are about 15 sea level rises and reciprocal level drops that happened the last 140,000 years that exceeded a sea level change of 1 meter per century or more for a duration of greater then 2,000 years. These constant increase and drop in the sea level rise can also be referred to as micro interglacial cycles. 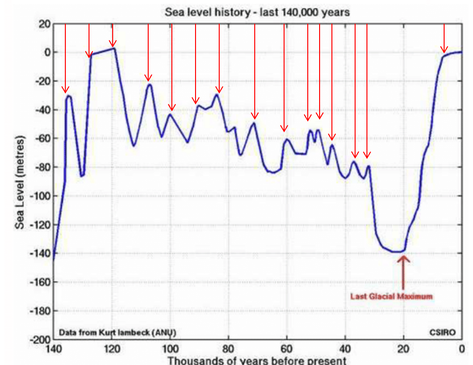 However,  it is quite possible that the current sea level stasis event could be experiencing a nano interglacial event or more reflective to orbital eccentricity cycles. If the current interglacial is more similar to Anglian Interglacial cycle it is quite possible the Holocene may last another 10,000 years with slight warming and increase in sea level.
​
“Eccentricity is important because it regulates the strength of polar maximum summer insolation caused by precession of the equinoxes every 21,000 years.  Precession determines the distance from the sun during a Polar summer. If summer coincides with the earth’s perihelion then summer insolation can be up to 20% higher than average. However if the earth’s orbit is nearly circular, as it is today,  then precession has little effect at all. That is why we have about 12000 years left before cooling begins.” October 4, 2016 by Clive Best, When is the next ice age due? 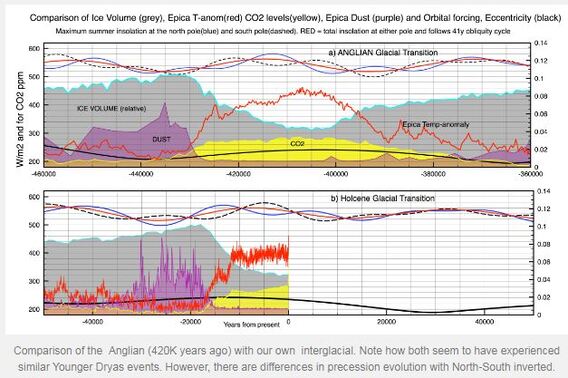 Micro Interglacial Cycles Off the Coast of Florida
MOTM ran some very rudimentary speculative numbers on the movement of the Florida Coast line over the last 115,000 years. As you look below we show a map with the rough estimate locations of the coast lines along the southwest part of the panhandle of Florida 115kya, 208kya, 80kya, 70ya, 50kya, 40kya, 20kya, and present. The next map shows the estimated Florida coast line 120kya years ago during the Eemian Interglacial and 18,000 years ago during the Glacier maximum.
The first map gives the viewer a general idea how much the coast of Florida moved inland our outland during the dozen or so micro interglacials. The three largest movements of the coast line from the last 115,000 years was the post Eemian Interglacial, Glacier Maximum, and Holocene Interglacial (present). During Holocene Interglacial melt it is estimated that the coast line of Florida moved inland 300km over 10,000 years or roughly 3 km per century.  Using very basic and speculative data we theorize that the lower southwest panhandle of the Florida Coast was moving inland or outland at a rate of 2 kilometers or greater per century 50% of the time the last 115,000 years. These numbers do not take into count of the uniformity of the elevation of the land in southern Florida or Subsurface coastal plain. In some places the subsurface or terrestrial gradient is steep. For instance, a one meter raise in the sea level might change the coast at a more rapid in the lower interior of Florida due to uniform distribution of the elevation across the terrestrial plain.  MOTM simply devised these illustrations and maps so that the party of interest can develop a clear picture on how variable the sea level change has been the last 115,000 years. MOTM estimates that there is 95% chance that the Florida Coast line in the Southwest Panhandle will start move inland or outland at one meter per century or 2 kilometers per century within 5,000 years without even considering Anthropocene influence unless the current interglacial persist and mirror the Anglian Interglacial. This shrewd speculative analysis shows that after there has been a prolonged stasis in sea level change of about 5,000-10,000 years in length it is followed by an increase or decrease of the seal level at a rate of a meter or more per century.

Micro Interglacial Cycles and Reef Building Corals Migration
Not to mention that interglacial and micro interglacial cycles may play important role in the evolution of life as we know. It is hard to measure and weigh when science, in it’s infancy, and human kind’s recorded history is less then 5,000 years old. It is truly remarkable to think that all life in the upper Northern Hemisphere evolved with such radical changing environments in contrast to our current climatic environment. Along those lines, just think, reef building corals average depth is 18-27 meters in depth. One may summarize an  reasonable speculation that entire coral reefs were being completely killed by depth of the ocean, temperature change of sea, or exposed to a dried element almost roughly every 20,000 years over the last 115,000 years. With partial and half die off events every 5,000 years.


Please Read MOTM Article
Glaciers or Rising Oceans; Damned if you do, damned if don’t, And maybe both
Paleohydrological events from the late Pleistocene to the Holocene 30kya to 1500AD
​
Once again MOTM would like to thank you if you made it all the way through the Article.
As a disclaimer we do not deny there are anthropocentric effects on the globe or increases in carbon dioxide.  Many of our graphics and speculative number crunching is geared only to spur debate and discussion on subject matter. We would like to open future discussions on the Nano Interglacial Cycles and The Effects of Dust on Interglacial Cycles.

Nano Interglacial Cycle
Medieval Warming Period
"During the Medieval Warm Period, wine grapes were grown as far north as England, where growing grapes is now not feasible and about 300 miles (500 km) north of present vineyards in France and Germany. Grapes are presently grown in Germany up to elevations of about 1800 ft (560 m), but from about 1100 to 1300 AD, vineyards extended up to about 2500 ft (780 m), implying that temperatures were warmer by about 2–2.5°F (1–1.4°C). Wheat and oats were grown around Trondheim, Norway, suggesting that the climate was about 2°F (1°C) warmer than present (Fagan, 2007)"(Medieval Warm Period)