Paleohydrological events from the late Pleistocene to the Holocene 30kya to 1500AD
February 3, 2018

6,000 to 500 years ago
Since the last interglacial, Eemain 115kya, the earth has experienced several catastrophic paleohydrological events toward the end of Pleistocene 30kya-11kya and the Holocene 11kya to 1500AD driven by the glaciers advancing and retreating and Orbital Variations. In an earlier article by MOTM, it has been pointed out that, “However, if you put that in a historical perspective; 19,000 to 6,000 years ago the sea level raise rate was roughly 529% to 2814% higher than today. Oceans during this time raised close to 120 metres (4,724 inches), this  sea level  raise would be 56,915% percent larger than the 8.3 inch sea level raise observed 1880. This all happened from 18,000 to 6,000 years.” This article introduces sea level rise from retreating glaciers responding to orbital variations and the conundrum of increased ice near East Siberia in the late Holocene. That is not the end of the story, some have often said that we live in one of the most extreme and fast changing climate periods in earth history. This argument does not give credit and respectful appreciation for all the massive climate change events that happened 30,000 to 500 years ago. The current climate seems rather stable and calm compared to many of the events that happened 18,000 to 500 years ago.

​Recently, newly discovered evidence from tree rings, from 1300 -1900, showed multi-decade megadroughts in North America Griffin et al 2007. One of these droughts, in 1550, has been speculated that it may have led to the death of more indigenous people in the region that is now called Mexico then even compared to the death toll caused by the introduction of small pox Therrell et al 2002. 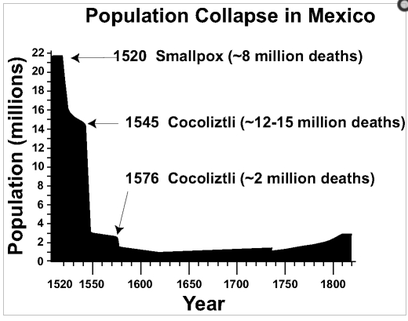 ​This drought increased the frequency of certain epidemics, Cocliztli, that may have led to the death of over 80% of the population of indigenous people living in Mexico Elliot and Hunt 2002. Nor were these megadroughts unique to North America, during the same time Europe was having its own warm period and megadrought. During 1540 Europe saw temperatures that were significantly elevated compared to temperatures recorded from 1966 to 2015 Rene Orth et al 2016. This heat wave was also accompanied by an 11-month-long Megadrought that covered 2 to 3 million km2 Spring et al 2014. 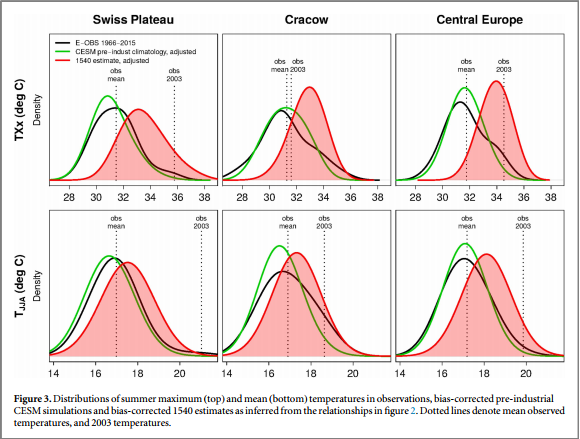 ​Furthermore Tree rings analysis from Europe show chaotic weather patterns in Europe over the last 2,500 years that even coincide with the ending of the Western Roman Empire and the great migration phase in Europe during 250-600 CE Esper et al 2011.
​
These climatic ecosystem alternating events are not limited to North America or Europe. 6,000 years ago Sahara Desert was covered in grass and shrubs and supported a savannah like ecosystem covering millions of square miles. Due to a slight change in the orbital variation of earth the Sahara started to dry up and the level of precipitation begin to decline NOAA. Within an abrupt short period; by 5,000 years ago the Sahara Desert was almost completely reduced to an ever growing desert. 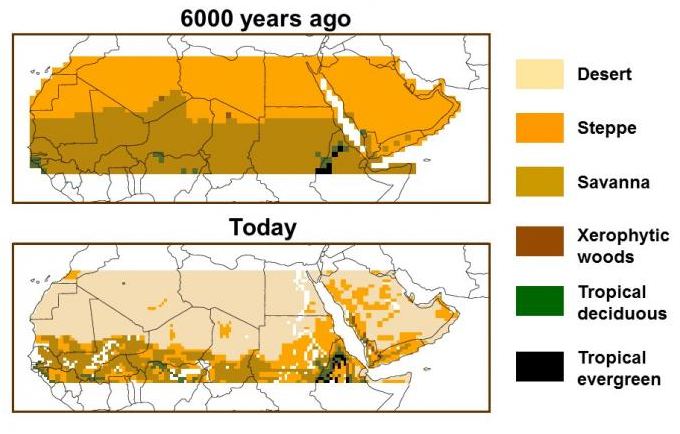 ​Could early climate change be the result of human influence of deforestation and human related grazing? It is speculated by some groups that Sahara Desertification might have been due to heavy grazing 6,000 years ago. However, scientific evidence shows a very strong correlation with weather pattern changes caused by orbital variation of earth. However, it has been widely accepted that over half of Europe’s forests have been removed by human activity within the last 6,000 years. Could this have had a strong enough impact to cause the drought and heat waves of 1540 AD? Many of the current heat waves accompanied by a megadrought have not reached the same level of intensity. However, there is no doubt that Humankind is having some micro or maco level effects on the ecosystems and climate. Are they as extreme as we think?

Please refer to the MOTM articles on this interglacial, glacier retreat, orbital variation, and human impacts:
Glaciers or Rising Oceans; Damned if you do, damned if don’t, And maybe both
A Climate Change Perspective- Relating Things to the Early Holocene and the Eemian 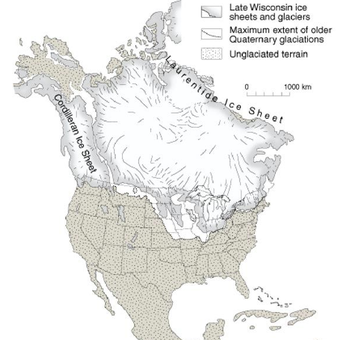 Let’s make a trip back to North America 30,000 to 15,000 years ago. The oceans are close to a 120 meters lower, the majority of Canada is covered by glaciers, and the landscape was significantly cooler. The extinct mega fauna such as the Western Horse, North American Lions, Short faced bears, Columbian Mammoth, Giant bison, American Mastodons (5mya-8.5kya), Jefferson’s ground sloth, Dire Wolves, Camelops (7ft at shoulder, 4mya-11kya), North American Cheetah, Stag-Moose, Saber-tooth cat, Shrub ox, American Mountain Deer, Beautiful Armadillo (1.2m length, 1.8mya-11kya), Pygmy Mammoth (8.5 kya, Channel Islands, CA), Giant Beaver, Woolly Mammoth, and etc dot the landscape. What is really unique about these animals is that many of them existed for several million years before their extinction? They have crossed the land bridge between continents; they survived over a dozen interglacial periods. The last two interglacials had temperatures even slightly warmer then current temperatures. Even more, during the Eemian the oceans were over 20-30 feet higher then present sea level. This time represented extraordinary natural wildlife living in a world with extraordinary hydrological events that dwarf current events. As you can see in the picture below shows that the full extent of the glaciers in North America was reached about 18,000 years ago. The glaciers then started to retreat North East for the next 12,000 years until 6,000 years ago. Coincidentally, 6,000 years ago is when the Sahara Desert started to become a desert. 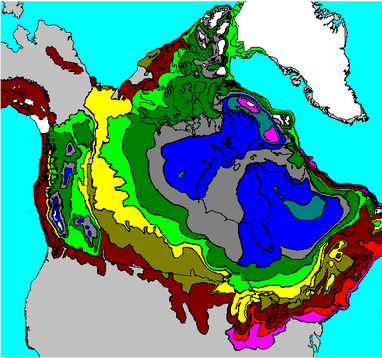 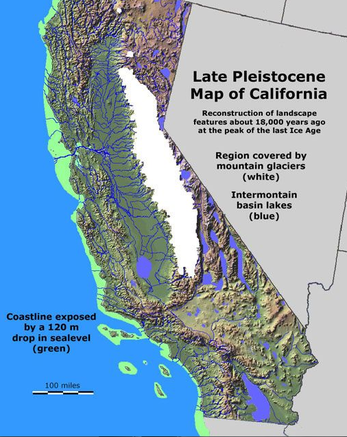 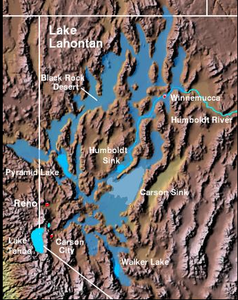 The picture below illustrates massive lakes that covered the western landscape throughout California, Nevada, Utah, Montana, Oregon, Idaho, and Washington 17,000 years ago. The red arrows shows the path of a paleo megaflood’s referred to the Bonneville flood. These massive lakes were the result of the ice age’s cooler temperatures and ice melt. 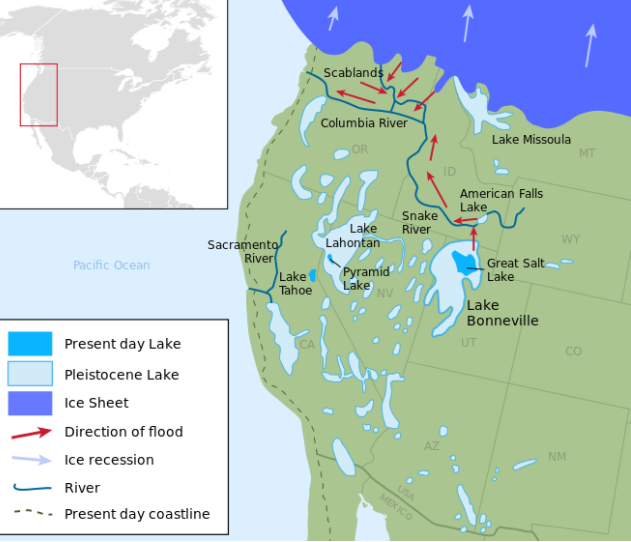 ​Around 17,400 years ago the waters of Bonneville ripped through a sedimentary bedrock dam which
was 5,000 feet tall and 340 feet thick releasing 850 cubic square miles of water  at a rate almost 4,000 times higher than the average flow of the Colorado River.
But, this flood was not even the biggest, the Lake Missoula flood happened about 15,000 years ago when a ice dam breached.
All of this might be very impressive to most people. The amazing part is; may of these massive ancient paleohydrological events were a feed back response to orbital variations in how the earth rotates around the sun. As we go into the future, scientist are trying to understand our past to understand our future. As the tilt of the earth is currently shifting back, what should we expect? Could we see droughts, animal migration or behavior changes,  and increase in precipitation in places due to orbital variation? Is this being factored in enough in current climate modeling?

Please:
​Glaciers or Rising Oceans; Damned if you do, damned if don’t, And maybe both
A Climate Change Perspective- Relating Things to the Early Holocene and the Eemian
​