Though people have good intentions, should we jump to the conclusion that warmer temperatures are the major cause of many of these bush fires? It is well known in Australia that invasive plants have been dominating many ecological systems and have had alarming effect in wildfires such as buffel grass.
​
“In spinifex grasslands, traditional Aboriginal burning regimes have been used for millennia to renew the landscape and promote growth while effectively breaking up the landscape so old growth areas are protected and large fires are prevented. Current fire management within Tjoritja "combines traditional and scientific practices". However, these fire management regimes do not easily translate to river environments invaded by buffel grass. These environments have, to our knowledge, never been targeted for burning by Aboriginal peoples. Since the arrival of buffel grass, there is now an extremely high risk that control burns can spread and become out-of-control bushfires. Even when control burns are successful, the rapid regrowth of buffel grass means firebreaks may only be effective for a short time before risky follow-up burning is required. And there may no longer be a good time of year to burn. Our research suggests that in areas invaded by buffel grass, slow cool winter burns—typical for control burning—can be just as, or more, damaging for trees than fires in hot, windy conditions that often cause fires to spread. Without more effective management plans and strategies to manage the changing fire threat in central Australia, we face the prospect of a future Tjoritja in which no old-growth trees will remain. This will have a devastating impact on the unique desert mountain ranges” 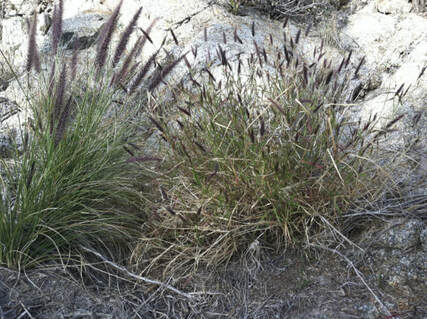 There is no doubt some general warming trends occurring globally and there is an observable increase of Carbon Dioxide. However, some professionals believe there is some decrepancies in the temperature reporting by ACORN2

What is the mean temperature of Australia ?
“However I got wildly different values for the Average December temperature. I got 23.8C as the area averaged temperature for Australia between for 1961-1990 instead of their 27.2C. So obviously I must be wrong – or am I? I take the daily average  temperature to be (Tmax+Tmin)/2 and then average this value in each of the 12 months between 1961 and 1990 and for each of the 112 stations. My values then agree almost perfectly with various travel/tourist website averages for expected monthly temperatures. For example my monthly average values for Sydney are:”
​
The ACORN2 average December temperature for Australia is 25.9 C
“ claimed in the last post that average temperatures in Australia for December  was 24C and not the 27C as stated by BOM, even though everyone else seems to agrees with them (CRU,GHCN,Berkeley) – See for example  this graphic. So apparently I must be wrong and should beg for forgiveness on twitter. However if  you actually use just the 112 quality controlled ACORN2 station data to calculate the average temperatures in exactly the same way as CRU (rather than triangulation) then you get 25.9C, provided you first exclude off-shore stations.  The result therefore depends on your definition of the average.  I calculated  the spatial distribution for ACORN2 stations binned and averaged in exactly the same way as CRU (5 degree bins).”
“The average December temperature now works out at 26.1C, which is a bit nearer to the quoted 27.1 but still not quite there. If you now exclude Tasmania then we reach a value of 26.4C. This is the highest value I can get using CRUs explicit 1961-1990 normalised values, but this is still 0.8C short of ACORN2’s quoted average December temperature.”
Though there are some discrepancies that need to be worked out for maximum temperatures reached in 2019-20, how do we reflect on this in terms of the 1974-75 wildfire and fire prone invasive plants dominating the some ecological systems in Australia? And many people would find it intriguing to know that the legendary forgotten fire of 1974-75 was driven by Cool and dry conditions.

​And spotting historical records suggest that abrupt changes from dry phases to wet phases has been normal in Australia for the last 150,000 years.

Continuous 150 k.y. monsoon record from Lake Eyre, Australia: Insolation-forcing implications and unexpected Holocene failure
Our reconstructed history of Lake Eyre provides the first continuous continental proxy record of Australian monsoon intensity over the past 150 k.y. This continental record's broad correspondence to the marine isotope record demonstrates that this very large catchment, with its hydrology dependent on a planetary-scale climate element, responds to Milankovitch-scale climate forcing. Abrupt transitions from dry phases to wet phases (ca. 125 and 12 ka) coincide with Northern Hemisphere winter insolation minima rather than Southern Hemisphere summer insolation maxima, indicating that Northern Hemisphere insolation exerts a dominant control over the intensity of the Australian monsoon.
How much did the early climate of Australia change the last 10,000 years using sea level as an indicator?

Holocene sea-level change on the southeast coast of Australia: a review
"This data base has been limited to fossils with accurate descriptions of their facies associations and stratigraphic relationships to present mean sea level. Results show that sea level during the Holocene marine transgression rose to between −15 and −11 m at 9400—9000 cal. yr BP. Sea level then rose to approximately −5 m by 8500 cal. yr BP and to approximately −3.5 m between 8300 and 8000 cal. yr BP inundating shallow incised valleys resulting in the deposition of shell-rich transgressive sandsheets within shallow incised bedrock valleys. Present sea level was attained between 7900 and 7700 cal. yr BP, approximately 700—900 years earlier than previously proposed. Sea level continued to rise to between +1 and +1.5 m between 7700 and 7400 cal. yr BP, followed by a sea-level highstand that lasted until about 2000 cal. yr BP followed by a gradual fall to present."

And that was only the last 10,000 years. Below is a map of what Australia looked like 20,000 years ago. Remarkably the the sea level was 120 meters lower then the current sea level. 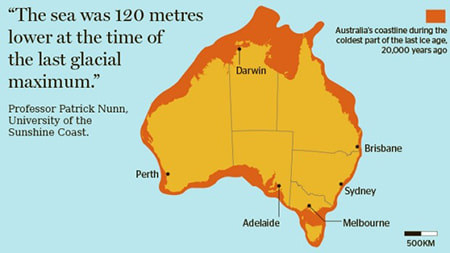